My second week I definitely felt more comfortable with how the system worked at Kijabe and in the operating theater.  The anesthesia team and surgical techs were a huge help.  They knew their equipment well and were amazing at improvising when needed.  Although the instruments were not what I am used to I honestly don't think it affected the surgical results at all.
I spent my time in the operating room each day.  We performed a bilateral cleft lip, several sinus surgeries, cleft palate repairs, tracheostomy and even a fat graft to the left cheek.  Several of the cases I will always remember.
Alex was a 17 year old boy who presented with a large sphenoid sinus mass. the sphenoid sinus is in the back near the skull base. The mass had eroded all the walls of the sinus and he had become blind in 2019.  He had debilitating headaches in addition.  The plan was to biopsy the mass.  His brother of 23 was caring for him and was informed that the surgery would not restore his sight and would likely not improve his headaches.  We would try to get a diagnosis for him.
I was concerned about bleeding and cerebral spinal fluid leak.  The lighting was poor and the bleeding was enough to make it difficult to see well.  Another danger factor!  But I perservered and entered into the region of what I thought was going to be slow growing tumor.  But praise God he had a massive mucocele.  These can form in the sinuses and cause slow expansion and pressure on surrounding structures.  The cyst was widely opened and drained.  This would cure his headaches and prevent any further damage to his brain.  The day after surgery Alex was headache free and going home with his brother.  What I learned- "Trust in the Lord with all your heart and lean not in your own understanding.  In all your ways submit to him and he will make your paths straight." The Lord drew him to Kijabe not for a biopsy complicated by bleeding or CSF leak but for a healing.  I had the opportunity to share with Alex and his brother how the Lord was providing for him.  Although he is still blind I know that God is watching over him.
Below is one of the precious cleft lip children we operated on.  He has a bilateral cleft which involves both sides of his lip.  These are much more challenging to reconstruct. This family traveled 5 hours for surgery.  He had a long surgery but is recovering well 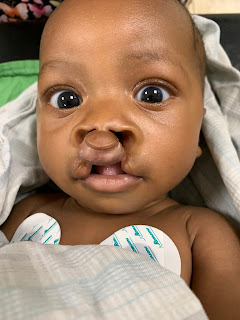 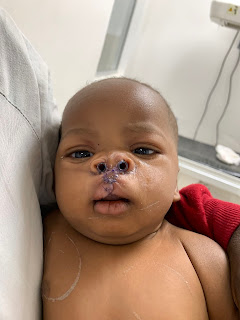 On my last day, we rounded on a 34 year old female who had arrived hours earlier.  She had a large thyroid mass compressing her trachea and making it difficult for her to breath.  She has been seen at another hospital several weeks before where a CT scan showed a highly malignant thyroid cancer.  She would die without a tracheostomy (breathing tube in the neck).  This would not be easy with this large mass obstructing her trachea.  We prayed that God would have mercy on her.  We were able to get the tube in place and do biopsies to help us determine if she would be a candidate for further surgery.  God proved faithful again despite our fears of the difficult situation.
I am ending my week in awe of God's faithfulness.  He will never leave us nor forsake us.  He makes a way for us.
"So do not fear, for I am with you;  do not be dismayed, for I am your God.  I will strengthen you and help you;  I will uphold you with my righteous right hand."
Thank you for your faithful prayers- They worked!!
Chase
Posted by isaiah at 11:51 AM