This is a 2 year old boy with what was described as noisy breathing. he was not walking and developmentally behind.  over the last 3 weeks his breathing has worsened to the point where he was weak and eating poorly.  below is a photo of us in the operating theater urgently treating his upper airway blockage. 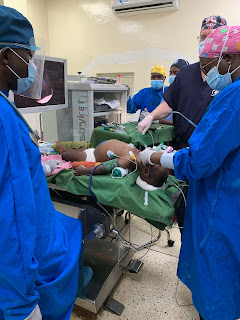 This is a difficult surgery in a US setting but in a resource poor hospital we were hoping for a miracle.  The patient had papillomas on his vocal cords and just below the cords.  these were large and blocking his ability to breath.  With the tools that we had we were able to remove enough to stabilize his airway.  We were able to avoid performing a tracheostomy which was the likely outcome I told his teenage mother. All glory goes to the lord.  Below is the patient post operatively, breathing easily and ready for discharge to home. 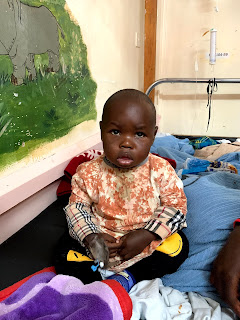 He will need further follow up as these can return.  But this was a great witness of the power of God to his young mother.

We did many other surgeries this week.  Below is a vascular malformation in a 12 year old that was removed.  Unfortunately he had to return a second time to the OR today for bleeding. 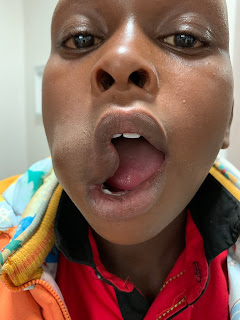 God was so present this week as we worked steadily to try to accommodate all the patients needing surgery.  The surgery resident worked tirelessly and I am so grateful for his help.  Despite the long hours in the OR and clinic there were many that will have to wait.  It breaks my heart to leave them but I know that is God calling me back again soon.  We are on our way home now.  We have arrived at Nairobi airport after our 5 hour drive.  We have 5 hours waiting and then off to Germany, Newark, and hopefully Rochester by late Sunday night.  Thank you for prayers for safe travels.