"In matters which he took up pertaining to the service of our Lord, he made use of all the human means to succeed in them, with a care and efficiency as great as if the success depended on these means; and he confided in God and depended on his providence as greatly as if all the other human means which he was using were of no effect"
Biography on St Ignatius

It felt like I was using every human resource I had over the last weeks.  But it was only by the Grace of God that I was able to complete the work that was done.  God orchestrated every detail and touched so many people on this mission. I am amazed at the amount of work that was done on this trip! The patients were arriving from all over Kenya, traveling over 9 hours to get care for ENT issues.  I worked day and night to see as many patients that came to be seen.  Some had to wait 2 days to be seen but they were so gracious and thankful for their care.  I was also inundated with hospital consults and casualty visits.  It seemed a never ending stream.  God was so gracious to give me rest at night this trip.  This was a special blessing from Him to strengthen me for the long days!

Pictured below is a 6 week old baby with bilateral choanal atresia.  This is a congenital disorder due to failure of the back of the nose to open into the throat.  Infants are obligate mouth breathers so it is miraculous that he has survived. He only weighs 2 kg (4.4 lbs) at 6 weeks.  I took care of his brother 2 years ago who had a successful repair of the same disorder.  This child is much smaller and the repair will have more risk of failure.  He was operated on thursday and all went well. He was nursing by the next day and doing well. He has some nasal stents in place and will have these removed by the general surgeons next week. 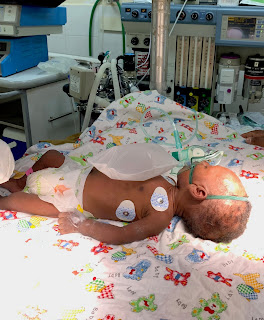 Over the last week, I operated on 2 mandible fractures, removed a parotid mass in an 18 year old, several tonsillectomies, sinus surgery for nasal polyps, removed a minor salivary gland tumor of the palate, and performed multiple biopsies of a number of tumors.  There were several surgeries that I could not get done and I am praying my general surgery colleagues can finish the work.

Thank you for the prayers. I could not have endured without them. It is very clear to me that HIS hand was upon me.

Chase Miller
Posted by The Millers at 11:11 AM