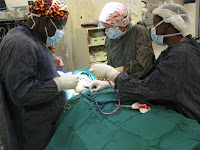 "The waves of death swirled about me; the torrents of destruction overwhelmed me.  The cords of the grave coiled around me; the snares of death confronted me.  In my distress I called to the Lord; I called out to my God.  From his temple he heard my voice; my cry came to his ears."

The diseases of the people are far advanced and overwhelming. Death is not far from them.  I cry out to the Lord to heal them.  Please equip me to fight the battle that surrounds them.

"The earth trembled and quaked, the foundations of the heavens shook; they trembled because he was angry. Smoke rose from his nostrils; consuming fire came from his mouth, burning coals blazed out of it.  He parted the heavens and came down; dark clouds were under his feet."

The Lord was moved with anger at the destruction of His people.  He came down to fight the enemy. He fought the battle!

"It is God who arms me with strength and makes my way perfect. He makes my feet like the feet of a deer; he enables me to stand on the heights.  He trains my hands for battle; my arms can bend a bow of bronze.  You gave me your shield of victory; you stoop down to make me great.  You broaden the path beneath me, so that my ankles do not turn. "

The Lord readies me as a warrior. He strengthens me for the battle.

"Therefore I will praise you, O Lord, among the nations; I will sing praises to your name."

We are preparing for our upcoming trip. I leave 3/30 for the long trip.  I appreciate your prayers as I embark on what feels like a battle against sickness and death.  Please pray for God's victory and that He would be glorified!