We made it home with no issues, praise the Lord.  I had no internet access in my housing location for my last week so I apologize for no Blog updates. 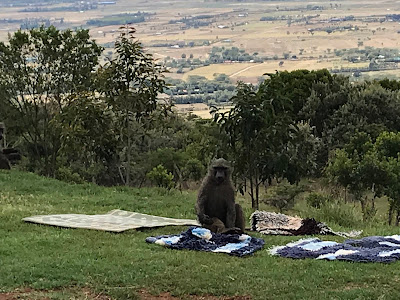 When we arrived to the ENT house we had a friend in the front yard playing with some of the laundry drying in the warm sun.  What a fantastic view we have of the surrounding valley and mountains.

We had a busy week doing cleft lip and palate. surgeries  There were 4 surgeons and we were able to run 3-4 rooms throughout the week.  Although a chaotic first day screening 60+ patients the week overall was peaceful as compared to previous years.  The Lord was definitely in charge and gave us a very manageable pace.  Overall, we were able to perform 49 cleft lip and palate surgeries.  While we were busy in the operating theater, the chaplains were busy ministering to the patients.  At the end of the week they shared that 15 women gave their lives to Christ! 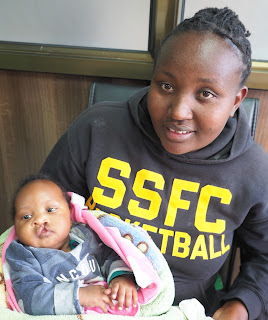 Enud is 4 months old.  At his birth  mother was cast out of her tribe and disowned by her own mother.  It is traditional thought that the cleft deformity is caused by the mother's sin.  She and baby arrived to the cleft camp desperate for help.  Enud was screened and accepted for surgery.  After surgery the nursing staff witnessed mom receiving her baby with tears of joy that came like a flood.  She would now be able to return to her community and be accepted by her mother again.  God had redeemed the curse! 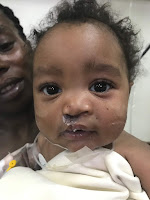 Susan is a 3 month old with unilateral cleft lip deformity.  She underwent surgery on Monday but during surgery she was noted to have abnormal breathing creating concern.  After surgery she did not arouse from anesthesia even after 3 hours of observation.  We had no explanation for her complication.  We had no ventilators or means to care for her overnight so made plans to transfer her to a nearby hospital.  We prayed for God's mercy and healing for Susan.  Transfer was via trolley over bumpy roads.  We noted that she was somewhat more awake when we arrived at a the transfer hospital.  As we lingered she continued to improve and we were able to extubate her that night.  The next morning she was back to her normal self, praise the Lord.  As we put the puzzle pieces together we realized the anesthesia machine was broken and was recirculating Susan's breaths so she had dangerously high CO2 levels.

These are just a few of the stories of changed lives.  The impact of these surgeries is life changing and I am rejoicing in all that God has done this week.

Thank you for all your prayers,
Chase Miller